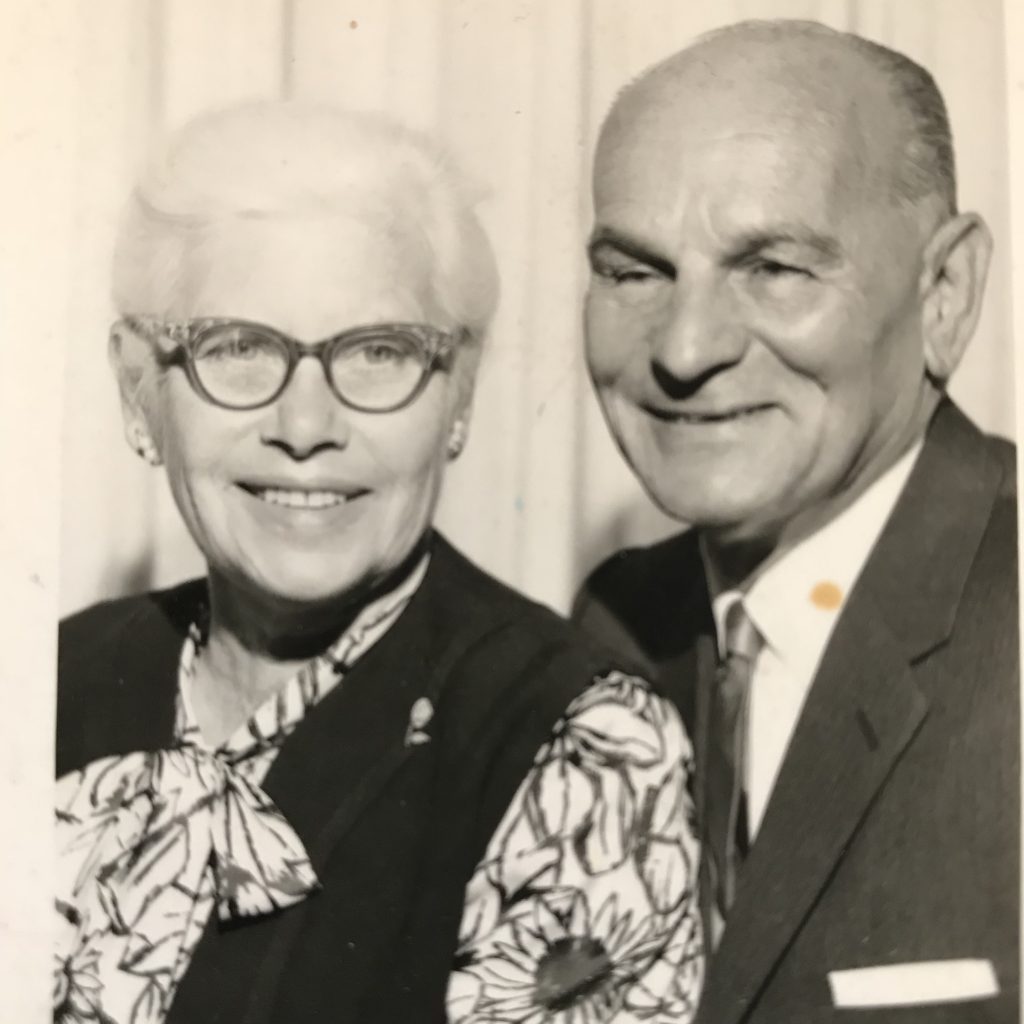 Clarence Edgar Berger died of an instant massive heart attack in the late summer of 1984. He was my mom’s dad. My Grandpa B.

He’d always greet me with a big smile, but he didn’t ever say much to me. He was always swatting his dogs with his cane – somehow in a loving way. I don’t remember too much about him, but he really liked this restaurant called The Black Forest. He loved apricots and canned apricots…and probably lots of other canned fruit that filled my grandmas cupboards for years. They grew and canned the fruit themselves. He might have had the kind of hoarding tendency that many of those that lived through the Great Depression of the 1930’s had because he kept everything – even some rusty old garage door springs…you just never know when you’ll need those.

He was the first person I knew that died.

His death was a surprise to me. I knew about death, but I didn’t know yet that it could happen to people that I knew or to my family members. There were no warning signs, no diagnosis or conversation about him being sick, just the conversation where my parents told me that he died in his sleep one night.

He was cremated as were his wishes according to his will and there was no service. I think his ashes were spread somewhere on a piece of property that he loved, but I’m not sure.

I remember feeling a chill when I thought about him being dead — his body burned up and turned into ashes. It was the first time I’d heard about cremation and it seemed like a very crazy thing to want done to your body, but after considering slowly rotting underground in a grave, I decided that maybe it wasn’t so awful.

I was worried and unsure if his Spirit was haunting us or hovering somewhere in our house. I felt it in my young body that he had regrets after his death. But who was the “he” having these regrets if he was supposed to be dead? I felt somehow that he was trying to communicate with my mom, my grandma and maybe my sister and I. He wanted desperately to express that he had been mistaken to spend so much time isolated and distant.

When I knew him, he was mostly sitting in his chair alone in a dark room sometimes watching TV, sometimes reading, sometimes just sitting there. No one ever said it out loud, but he was depressed. People of his time never talked about depression or even dreamed that it was something you could get help with. I think his depression was a deep misunderstanding that he had somehow failed, let people down, not done enough or become enough in his life. My mom said his depression was a result of his traumatic childhood being the son of a silver miner who was a dreamer and a schemer, occasionally striking it rich, but too often leaving them homeless and hungry enough to eat from trash cans.

At the time I didn’t understand any of these things, but looking back 34 years later interpreting my intuitive feelings and the knowing in my bones I had about him. He was a bit scary to me, or maybe just mysterious & unknown, when I was a small child. He was not as warm, nurturing or engaging as my Grandma B, she was my favorite of all my grandparents — maybe because she was the one I saw most often. My connection with her has always been strong, evolving and fulfilling even decades after her death. Even though I’m adopted, I always felt that she got me on a soul level, maybe because she saw a bit of her husband in me, even at a young age. But Grandpa B had a slow, subtle charm all his own. I was always aware of him, yet unsure how to broach his bubble of silence and darkness. It is only after many painful years of coming to understand the cunning, insidious ways depression clings onto and overwhelms the life force of those that host it, that I can feel a deep compassion and understanding of my grandfather, Clarence.

His legacy impacted my family in such a huge way, yet I don’t feel that we, or I, have ever given him enough gratitude, appreciation or credit due. He was a salesman early in his career and then a property manger later on. Any time he ever had any money, he invested it in rental properties in Southern California. They weren’t considered prime properties of the day, but he held on to them, managed then well and their value grew exponentially, as you can imagine.

Eventually, my grandparents, along with their friends Nicky & Angie Cohen, bought land and built a 44 unit rental property in Los Angeles. They did all the wiring, plumbing and most of the construction themselves. My grandma put in all the windows herself, she was also a master upholsterer.

Clarence died in the early 80’s and his wife, Helen Ahrens Berger, my Grandma B, died in the Fall of 1989. The financial legacy they left their only daughter, my mother, was significant. We were never rich by Silicon Valley standards, but my sister and I were given the opportunity for what was considered to be the best private education available at the time. We were able to live in a very safe, friendly and progressive community. I was given the great gifts of personal safety and freedom, autonomy and self-reliance due to growing up in a neighborhood community like Ladera in the late 70’s and early 80’s. I was given many experiences of travel, able to pursue most of the athletic, creative and extracurricular activities that I desired to. We always had enough money for what we needed, though not necessarily for everything that I wanted.

I was also painfully aware of the lives of the other kids I went to school with that were so much more extravagant, almost incomprehensibly so. The level of “haves” that I grew up going to school with was so intense that I felt constantly ashamed of my family, my clothes, our car, my home, my body and myself. I realize that I did not have to feel that way, no one forced to to be so ashamed, and yet I was. It took me a long time to realize just how rare it was to have the kind of wealth and privilege that I saw in those children and families I went to school with. And just how rare my own privilege is and was. I did see the advantages and privilege I benefited from even though, by comparison, I didn’t easily feel privileged. I knew that my life could have been much, much harder, more desperate and unfair. My parents continued and are still dedicated to their legacy of frugality in our family lifestyle, outside of our education – which was their highest priority.

So few people in my life now have had the kind of financial support that I have had. I’ve experienced a lot of judgement for being so privileged  to have these financial gifts from my ancestors, and still having the nerve to complain about anything in my life. I want to honor their lives and efforts, and express my gratitude to them for living such simple, frugal lives and for saving and investing so much to support my life and the lives of those in my family. Myself, my parents, my sister and her kids have all benefited greatly. It didn’t always feel clean or clear. Receiving financial gifts often comes with strings attached and emotional baggage to navigate. It feels the way it feels, and yet money offers possibilities that are just not available to everyone.

Sometimes, not always, death leads to inheritance and money passing from one generation to the next. I’m luckier than many, and not as lucky as some, in this regard. Life, death and money seem inextricably related.

My intention is to tell you the truth about the past, my ancestors and my family unashamed of my luck and privilege, if just for a moment. Living in shame of not having enough as some and having so much more than others is simply no way to live. I want to find a way to simply be proud of myself and my life.

I don’t know if I will have children to leave anything to or anything to leave when my time comes. Making lots of money in my career has eluded me in the past. Maybe I didn’t have enough motivation to support myself given all the financial support I had in the past. Maybe I took the phrase “work like you don’t need the money” and little too seriously. Maybe I feel so much guilt for having support that I might not deserve and don’t feel I can charge more than enough to break even because I don’t deserve any more luck or success than I’ve already had. That all sounds like a bunch of BS swirling in my head and keeping me stuck in fear, shame and guilt.

I’ve often struggled to find gratitude for my life through a decades long journey in & out of depression. For a long time I wasn’t proud to share this affliction of depression with my maternal grandfather, Clarence Berger. Today I deeply respect the way he soldiered though his life, always doing his best.

My mom always said that to me all the time. “You do your best, that’s all you can do.” I see where she gets it. I’m proud of this legacy, these people. They are the family that I have and I part of their legacy.

Backwards and forwards in time, I am finding the lines of connection, feeling the ways the legacies of my ancestors live on inside me. I don’t know for certain if my feelings and memories are accurate. I’m privileged at this time to have a mother that I can ask for details, dates, facts and her memories, but I wanted to see what I could remember on my own, and where it would take me down this memory lane. I’m grateful to be here. And grateful for your time, presence, attention and listening.