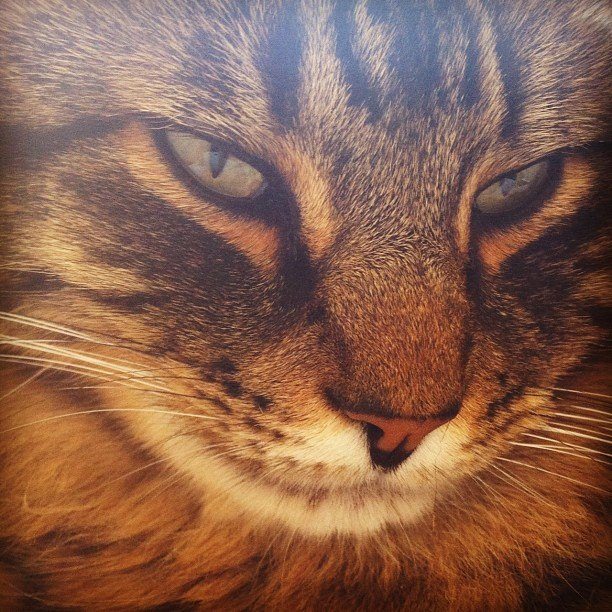 Remembering my beloved George-kitty today. A year ago, his brother John and I were so devastated when he disappeared.

There’s still a George-shaped hole in my heart where I keep all my memories of what a loving, unique, funny, curious, frustrating and amazing feline he was.

I’m not ashamed to admit that he was totally the in-charge and dominant member of our household. He was often a bully, pestering, attacking and biting his sweet brother, John, who would just lie there on his back and take it. He was mostly able to get his needs met by me at almost anytime day or night due to his tactics of chewing through electrical cords (especially my iPhone cord, that was his favorite chew toy), picking at the bottom of doors until he splintered the wood, clawing the cupboards, stairs, couch and screen door, knocking things off my altar and attacking plants, curtains and wall-hanging art. George firmly believed that all art on the walls must be attacked.

He would show off his beauty and majesty for all my guests and dazzle them with seductive leg rubs, head butts, purring and rubbing his face against their feet. George had an affinity for feet and bags. He would sit/sleep on my purse whenever possible and always paw through the purses/bags/luggage of anyone that visited. He would always try to get in my luggage if I was packing for a trip.

George LOVED water. He meowed incessantly for me to turn the shower on so he could drink from the showerhead. He would run through the sprinklers chasing the water drops until he was soaking wet. He would sit outside the shower door staring at me and meowing the whole time I was in the shower or bath, like “Let me in there!”

George was obsessed with carrots, celery and all herbs and lettuce greens. He would somehow know when I would even open the fridge to get out carrots. I think he was a bunny in a past life…

One of my favorite things was when he would carry his “sock-baby” (this brown chenille sock) around in his mouth. He could pick that specific sock out of a huge pile of laundry and play with it for hours.

George had his own special relationships with each of my different roommates Carl, Katelyn, and Christina, he won them all over, though clearly Katelyn was his favorite…he loved fashion as much as a cat was capable of. He knew the sound of his Auntie Rain’s car when she would come over often.

It was impossible to not pay attention to George and more impossible not to love and adore him.

George was serious about giving people (and John) the love. If he wanted to, you were going to get the love in a big way. He had this urgency and intensity about his life. He could not be contained by my house or the back yard, and he needed to get out and explore the wild, fascinating world of China Camp. He wasn’t much of a hunter, but a certain wildness overtook him around sunrise and sunset, like the outdoors was calling him to come out and play. Eventually that is where he met his maker…and was set free for new adventures.