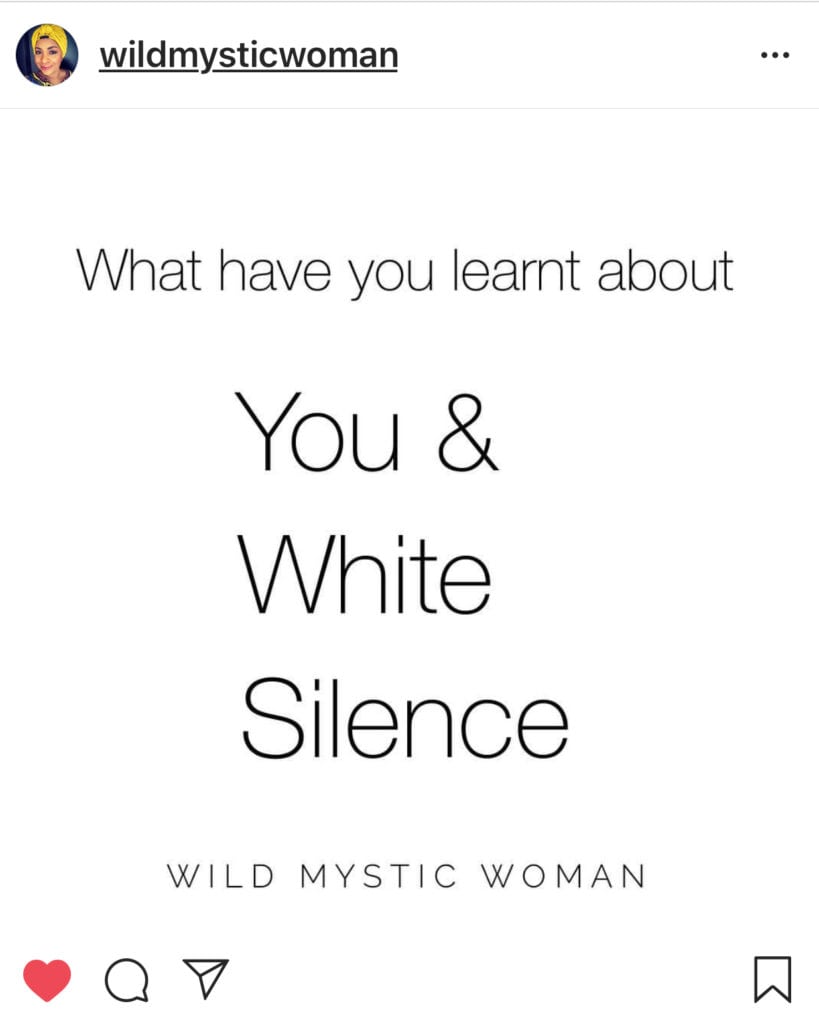 One of my most dangerous mistakes regarding racism has been to view the word itself as vulgar and it’s meaning only as overt expressions of hatred, superiority over, or prejudice against of BIPOC (Black Indigenous People of Color.) With that definition, there was no way that it applied to me. Not questioning, reevaluating or expanding my definition of racism has been part of my white silence. I’ve led myself to believe that if I don’t say anything mean, hurtful, judgemental or controversial and if I don’t directly harm, discriminate against or violate any BIPOC, then I am doing OK. I am clear now that this is not okay at all. In reality, I see how racism has flowed through words I’ve spoken and silences I’ve held, implications I’ve made, expectations I’ve had, illusions I’ve created, promises I’ve broken and so much more. Among some of my worst racist behaviors have been unfair judgements, toxic projections, pretending, ignoring and white silence.

When someone in my presence, my community or my family says something racist I feel so angry. I think to myself, “How can they say that?” “How can they not see and have compassion for BIPOC?” My face feels hot, my heart pounds and I feel on the edge of a cliff between staying “safe” in silence and jumping off into the unknown of this hot-button issue. I now see that the edge is not a safe place and that there is no protection in staying on that edge in silence. Facing racism is going to be scary whether in silence or out loud. At least if it is spoken about there is a chance for movement and transformation. My prayer is to take courage to draw my boundary and say, “No!” to racism in my space and beyond.

That is only a very small part of breaking my white silence though. Today when examining what I’ve learned about myself and white silence, I don’t yet have the words that I want or need. I’m finding them as quickly as I can. I’ve gone deep quickly trying to catch up from years of ignorance and have saturated myself with so much information and it’s all swirling in my head on it’s way to my heart.

The most real thing that I can say today about my white silence is that I’ve been afraid to speak and I’ve given in to my fear and resided in my whiteness. I’ve waited for someone else to say the thing that I am not saying. I’ve looked to someone else to take charge and tell me what to do. It’s bystander apathy and it means that precious human lives are ending and being ended because we aren’t dismantling structural racism.

I’ve found so many incredibly, brilliant Black women who are speaking about just what I needed to know and having the very conversations that I’ve needed to hear. They are spelling it out very clearly for white women just like me and I am grateful for that clarity. I am following Black women and witnessing the way they show up, do their work, take care of themselves and protect their space. It is giving me so much hope and making me feel alive.

I certainly do not pity myself, but my own work feels sticky, murky, self-flagellating and all consuming today confronting my white silence. I’m praying for discernment of when to speak, what to say and how to behave because now my game is changed. I feel like Edward Scissorhands. I want to lay down my weapons of whiteness and I am still not sure where they end and I begin.

I’m sitting in a place where my core ideas about myself are shaking. I had some comfort in feeling like a decent person and that comfort is currently gone. I’ve peeled to a layer of myself I do not like and it is sincerely uncomfortable. I pray that speaking these words will help me transform and bring me to the next step.

I’m sitting here, breathing and moving through because I do not want to live in a way that is violent, hurtful and destructive to BIPOC anymore. My cliche white woman tears are of no use to anyone, but that is where I am today.

I’ve starting paying reparations to BIPOC. Paying them for the emotional labor they’ve expended on my behalf. I’ve ordered many recommended books, followed many conversations, listened to many podcasts and I’m ravenously consuming so much truth that I have previously not paid attention to or been aware of. This is the state of my #meandwhitesupremacy journey right now.