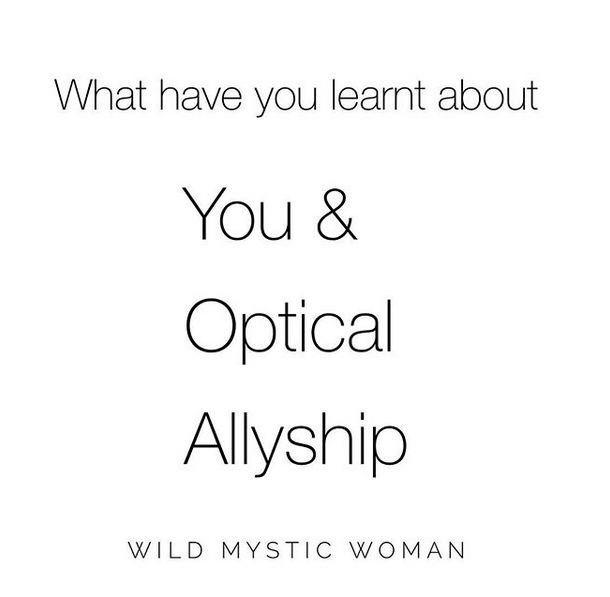 My internal dialogue when approaching or speaking to BIPOC is often, “Whatever you do, don’t fuck this up by saying the wrong thing! Act natural! Be cool!” That script is far from helpful and usually creates anxiety that makes me stick my foot in my mouth anyway. I thought that doing my work meant not treating BIPOC any differently than I would anyone else. I didn’t see or understand the harm that denying the past and present oppression and inequality causes. The term optical allyship wasn’t on my radar & I rarely considered my personal racism beyond a few fleeting thoughts.

I have been vocal about how awful white people can be. I do know now that BIPOC know this and don’t need to listen to me preach it. It’s part of performing to be seen as a good, safe, white ally.

I’ve considered ways to make reparations and assuaging my guilt is a part of that. I’m motivated by the desire to not feel guilty anymore…that is not doing my work, it’s bypassing.

I’ve been an armchair white feminist & a latte liberal. Now it’s time to show up, support & center the feminism of BIWOC and LGBTQ communities.

I’ve been hyper-focused on my reputation and how I’m being seen by others. BIPOC can spot this easily since their interpretation and understanding of white behaviors often determines their personal safety and survival. The only action worth my time is actual real work of understanding, owning and changing my racist behaviors.

I want to be safe and trustworthy to BIPOC that might work alongside me. This isn’t something for me to try to chase down, but a direction I can move in only as I stay dedicated to my anti-racism work.

This is one of the few times I’ve risked anything to address my own racism. Whatever thoughts anyone of any color may have about me for speaking so openly about the ugliness I’ve found inside myself, I’m willing to be seen. Being seen as a good person was been of the utmost importance to me for a very long time. My efforts didn’t get me anywhere that great, and they are very harmful to BIPOC so I’m throwing that out and looking deeper for more ugly truths to purge. I’m going for real, authentic and human over of fake nice, performative and bound by the oppressive strings of good person-hood.

DAY 19: “Today’s prompt is inspired by my sis @glowmaven and a post she shared a few months ago called ‘We are not interested in Optical Allyship’. Optical allyship aka performative allyship is white supremacy in action because it’s all about you. Optical allyship is the ‘look’ of allyship without the work of allyship. It’s jumping to call oneself an activist or an ally without actually risking anything. It’s performing allyship for the cookie of being called courageous and inspiring. Here’s some ways optical allyship plays out:

? Jumping on the activism or allyship ‘bandwagon’ without doing any real self reflection work on your personal racism
? Creating the ‘look’ of being an ally by tokenising BIPOC
? Reposting anti-racism posts and virtue signaling so that everyone knows you’re an ally, but not doing much more work beyond that ? Positioning yourself as an ally or activist leader, while continue to step over, talk over, speak for and take over the spaces of BIPOC
? Distancing yourself from your own white supremacy by continuously complaining about how awful other white people are
? Creating campaigns and movements for anti racism that are really about building your social capital or assuaging your white guilt
? Only showing up for the fun, easy, glamorous work and disappearing when its time to do the real work ? Clinging to symbols like pink pussy hats, safety pins and hashtags, over doing the real work
? Bringing activism words and BIPOC images into your brand to make your business look more ‘woke’
? Joining an IG challenge because you secretly hope it will make you look more ‘woke’ 😉
? Acting like an ally in public but harming BIPOC behind closed doors
? Going out of your way to be *extra* nice to BIPOC with the hopes you’ll be seen as a good white person
? Showing up only when it makes you feel or look good, or when you feel you get some sort of reward out of it beyond just doing the right thing
?Only sharing the work of BIPOC who you’ve deemed to be palatable to the white gaze.
? Doing the bare minimum to ‘look’ like an ally, without really risking anything.

What have you learnt about how you perform Optical Allyship?” – Layla Saad

← Me & White SaviorismMe & Being Called Out →