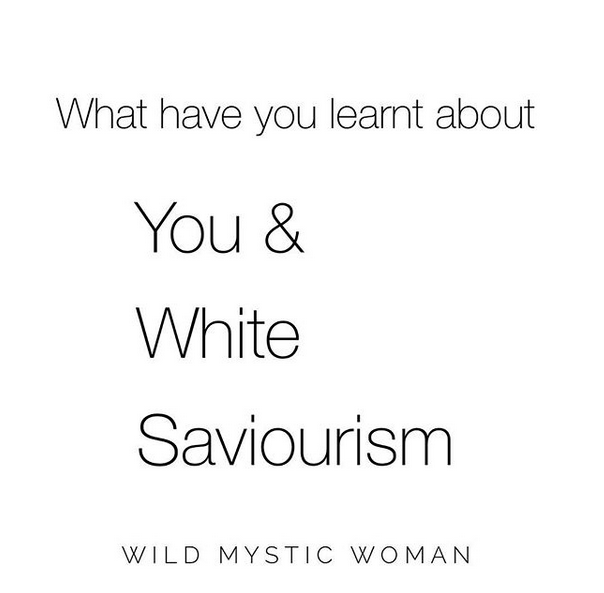 Just yesterday a white friend and I spent several hours brainstorming a podcast that would “give voice” to stories of BIPOC. I read an article where a Native American woman said the best thing she could be offered was “a seat at the table.” I incorrectly imagined that might mean a seat at my table. We talked about calling the podcast, A Seat At The Table, but decided against it so to not appropriate her words.

My interest in creating this podcast was a way to learn about issues that BIPOC are dealing with, but I do admit that white saviorism, exceptionalism & tokenization are lurking under the surface. Luckily we kept uncovering the error of our ways & didn’t end up agreeing on anything. Back to the drawing board. Back to me doing my anti-racism work.

A younger example of my complicity in white saviorism was when my Presbyterian Youth group travelled to a Mexican border town for spring break. We were supposedly helping strengthen the Mexicali communities by drawing more local people to their churches. I was part of the “children’s ministry” team. We read bible stories in Spanish, played & sang songs with kids.

Each night hundreds of white Christians in “Tent City” gathered at something called Prayer & Share. People got up and talked about how many “lives they had saved” getting the locals to “accept Jesus Christ into their hearts.” I was mainly there for the social part to be with my friends. I’m not a Christian and this whole “mission” felt shady to me, but I was given the Community Service award at my high school for this. I knew it was bogus, but accepted the award anyway. It was more White Colonialism, White Saviorism, and also evangelism.

Ever since I gave my allowance to an Ethiopian family every month via “Save the Children” as a kid, I’ve had this idea that if I give back, help out and share my time and wealth, then I can be seen as a good, kind person. It’s White Supremacist propaganda that white people can and should “save the world” by making it more white and colonizing BIPOC to save them…in reality white people to try to enslave, exploit and control.

Day 18: “White saviourism seems benign on the surface: Trying to ‘help’ the marginalised. Trying to ‘give a voice to the voiceless’. Trying to advocate for people who ‘cannot advocate for themselves’. In reality though, white saviourism is another form of white supremacy. White saviourism, like colonialism, assumes that BIPOC need white people to save them. That without white intervention, instruction and guidance, BIPOC will be left helpless. That without whiteness, BIPOC who are seen as below and less than white in the white imagination, will not survive. It puts BIPOC in the position of helpless children who need to be saved by the supposedly more capable and wiser white people.

Cast your minds back to last week of this challenge when we looked at anti-blackness and racist stereotypes. Many of you spoke about wanting to adopt and ‘save’ black babies. A fair number of you spoke about wanting to ‘save’ black men. Many of you have travelled or wanted to travel as volunteers (Google: Voluntourism) to Africa, Latin America and Asia to go ‘save’ the ‘poor people’ there. Many of you have felt the urge to ‘step in’ and speak on behalf of BIPOC’s needs, as if we cannot speak for ourselves. And many of you have believed that your mere presence could save BIPOC from the oppression they face. White saviourism is patronising, condescending and an attempt to assuage one’s own white guilt.

What have you learnt about You & White Saviourism? Have you stepped in to try and ‘save’ BIPOC or have you thought about it? Have you tried to intervene, offer instruction or guidance believing that your (superior white) view would offer the best solutions? Have you seen yourself as an activist whose job is to give a voice to the so-called voiceless? Have you spoken over BIPOC because you felt that you could explain their experiences better than they can? Have you thought of dismantling racism as something that you needed to give your ‘help’ to as some sort of good white benefactor? And have you been taken aback when BIPOC have told you that they don’t need your ‘help’, they need you to be quiet, listen, do the work and follow BIPOC leadership?” – Layla Saad