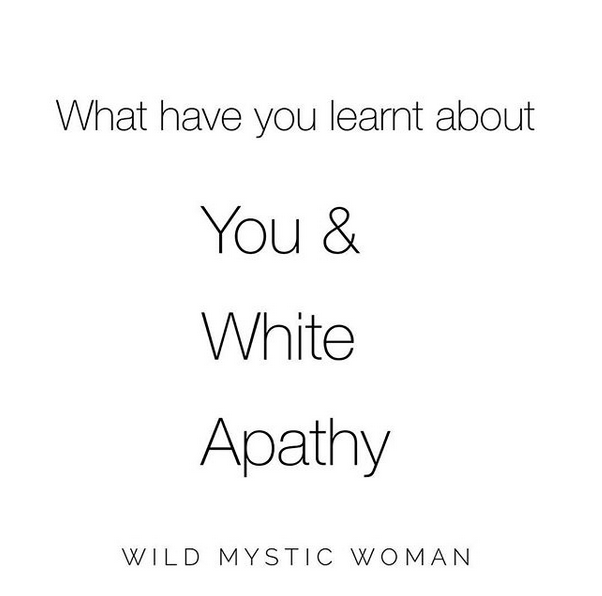 The biggest gut punch when it comes to me and white apathy is that I didn’t previously see any personal benefit to looking very closely at my own racism. To be brutally honest, I didn’t care enough to make it a priority. What motivated me to start caring was that I agreed to do a video interview about being an ally to BIPOC and checking my white privilege. I was motivated to not fuck it up, to not look like an asshole, and to do my best to have something helpful or of value to say. I knew that I’d better get my ass in gear and read some books, listen to some podcasts and google some phrases like “dear white people” and “what black women need white women need to know about racism.” With a little motivation, I was able to access to a huge amount of material I had never bothered to look for before.

Protecting my own reputation and image against sounding ignorant was my motivation to move from apathy to actively seeking out and digging deeper to discover all the ways I am complicit in white supremacy. Finding this 28 day challenge and devoting several hours a day to researching my own complicity has uncovered my level of extreme apathy.

In childhood I had a strong instinct to befriend those who were quiet, different, lonely/awkward or seemed to struggle more that others. My best friend in nursery school was a Chinese boy who was so shy that he almost never spoke. Maybe this was early white saviorism, but also I was genuinely curious and liked the people on the fringes best. I can clearly see and feel the struggles of those who are marginalized and treated unfairly, but racism became an area where I grew to be silent and apathetic when my desire to be liked, popular and fit in took center stage along with my drive for personal success and trying to be the best at everything I did.

Until recently, I was not willing to risk my reputation by posting often about confronting topics. I didn’t want to annoy, distress or cause discomfort to myself or other white people. I didn’t want to BIPOC to call me out for doing it wrong or being ignorant. I refused to confront racism head on or threaten my safe, comfortable white privileged bubble by acknowledging white supremacy or taking a stand against it. I have scrolled swiftly past many heartbroken/outraged posts about police shootings of young black people and then being acquitted for their obviously racist crimes. I’ve read halfway through horrifying stories about violence against BIPOC and clicked away when I felt the nausea rising in my stomach. I’ve changed the channel away from the news so many times to avoid feeling any despair at our out of control country. I’ve zoned out and let my eyes glaze over while listening to impassioned rants about racial inequality. I have not gone out of my way to make sure BIPOC feel comfortable when we’ve shared primarily white spaces, and I’ve made choices that have kept me mostly in white spaces, neighborhoods, schools and circles.

I’ve had moments of awareness here and there from watching a documentary, reading a book or attending an eye opening event, but I’ve slipped silently back into white apathy because no one laid out an easy path for me to show up, be seen as a good person and receive glory for coming to save the day. When I’ve felt attitude and side-eyeing from BIPOC, I’ve used my discomfort to reassure myself that whatever they are angry about is none of my business. But it most assuredly is my business, since the shade directed at me is due to my unacknowledged white privilege and inability to check it and own my racist behavior.

White privileged people in my community seem to constantly push the edges of their time, energy and financial resources, stretching themselves between work, kids, family & community. We look at our over-scheduled lives, and mention that we will do more social justice work if/when our lives are less demanding. If we had an real sense of the many extra layers of bias, prejudice, gas-lighting, and weapons of whiteness that BIPOC were up against daily on top of the same stresses and pressures we have in our lives, our white fragility would likely cause us to break down.

In times of crisis, we people of white privilege can show up and come together around deaths, diseases, babies, natural disasters and unexpected traumas. For ongoing epidemics, chronic illnesses, recurring traumas, and tackling systemic racial inequality though community support tends to wear thin quickly. I don’t see many white privileged communities coming together to tackle systemic racism and white supremacy. If it is happening, it is rare.

Community service, charity work and giving back are actions where we love to showcase our caring and involvement. I know what I will sometimes take minimal action and squeeze the maximum exposure out of it. White privilege has allowed us to steer clear of taking action that has no direct benefit to ourselves, especially when it isn’t trendy or popular. I know now that the time for apathy and self-serving behavior is up and there is no going back now that I see what I’ve been doing, or more precisely not doing.

DAY 15: “Last week was ugly, but necessary. This week we are looking at some other ways you have continued to uphold white supremacy, which will also begin to shine a light on how you can choose not to do so. You may share the rest of the prompts/work for the rest of this challenge in your spaces if you wish to. Don’t forget to use the hashtag.

White apathy towards racism is an important component that keeps white supremacy in place as the status quo. White supremacy has kept you numb and apathetic to really doing this work up until now. It’s not that you didn’t care about BIPOC. It’s that you didn’t care enough. It’s that you didn’t feel you had an incentive to care enough. There was no personal gain for you for doing this work. In fact doing this work would mean losing things and you knew it. You didn’t care enough to unravel all the ways in which you are complicit, in which you have actively done harm, in which you may need to release your white privilege and go against white supremacy in order for real change to happen. All the risks you would have to take outside of your comfort zone of privilege. Many of you are now realising that apathy (disguised as laziness, tiredness, fear, not knowing enough, being too busy, exceptionalism, performativity, etc) was like a fog that shrouded you from really giving a damn about BIPOC. Now that you are doing this work not just intellectually, but actually physically feeling it in your body, you’re realising that you cannot be apathetic anymore. That continuing to remain apathetic is the same as KNOWINGLY and INTENTIONALLY being racist and upholding white supremacy.

Today I’d like you to examine two things:
1) In what ways have you been apathetic when it comes to racism?
2) In what ways do you see white privileged people in your communities (family, friends, work) being apathetic when it comes to racism? (Important: don’t use this as an opportunity to publicly call anyone out. Simply make observations based on what you see/hear/feel).” – Layla Saad