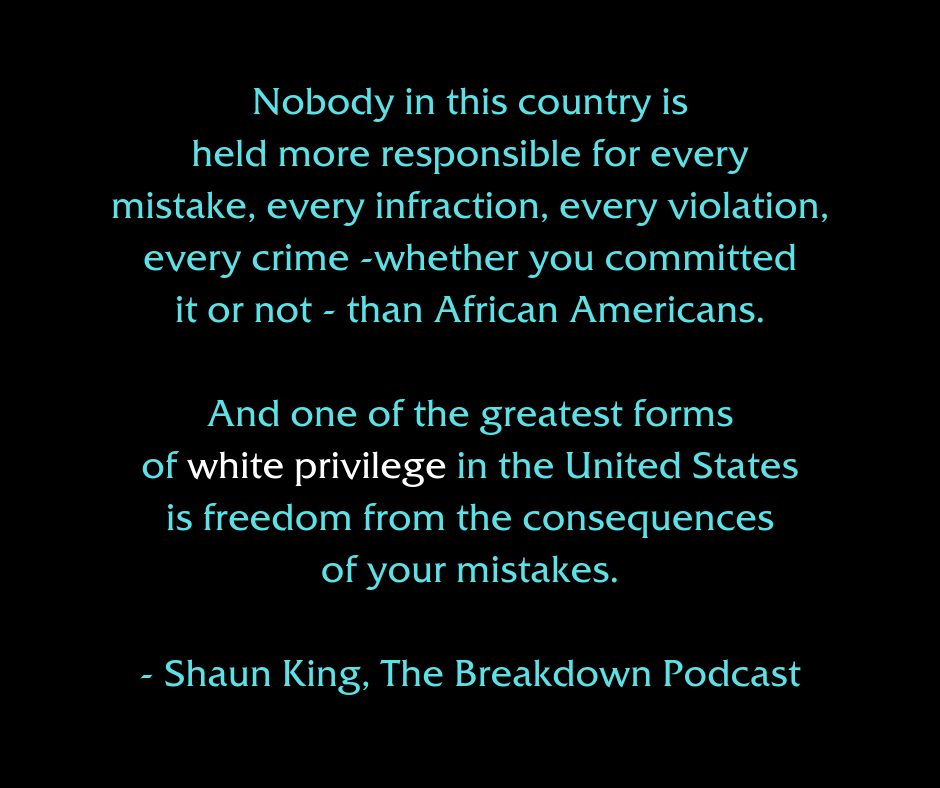 Shaun King offers a helpful explanation of white privilege on his new podcast, The Breakdown, which is now the #1 news & politics podcast in the world and the #4 podcast overall across all categories. I’m proud to be supporting The North Star as a founding member.

“Privilege is complicated to explain in part because it often functions in the form of invisible bias and it always masquerades as if it’s fair. One of the greatest forms of white privilege in America, and to be clear, white privilege has many levels that I will not unpack right now, but one the greatest forms in America is freedom from consequence.

Nobody in this country is held more responsible for every mistake, every infraction, every violation, every crime – whether you committed it or not – than African Americans. And one of the greatest forms of white privilege in the United States is freedom from the consequences of your mistakes.

That’s why over 100 different studies have shown that African Americans and white Americans use illegal drugs at almost the exact same rate, but African Americans are nearly 900% more likely to go to jail for it. It’s why study after study has shown that the average drug dealer in the United States is actually a middle aged white man, but the stereotype of a drug dealer is as a young black man. Do you know why we have that stereotype? Because nearly every person arrested for selling drugs is young and black. And do you know why middle aged black men aren’t selling drugs and middle aged white men are? It’s because black men are sent to prison for selling drugs before they ever get to be middle aged and white men continue to sell drugs until their golden years without the same interference or penalties or consequences.