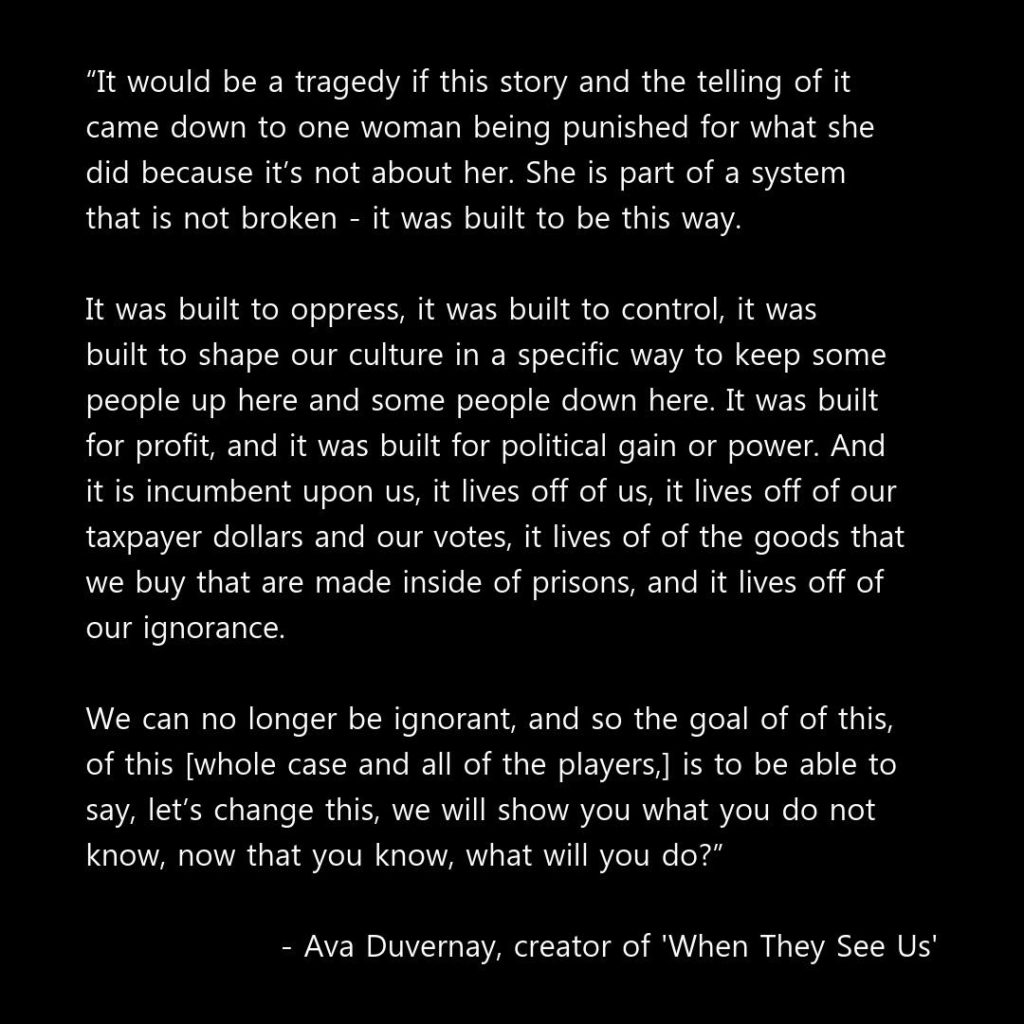 It’s never too late to fight for what’s right. If you haven’t yet watched Ava Duvernay’s 4 part series “When They See Us” on Netflix, it is a must see.

It’s truly brutal to watch this story told through the lens of the 5 young boys that were framed by New York prosecutors Elizabeth Lederer and Linda Fairstein in the 1989 Central Park jogger murder case. It’s very rare and so powerful because so few stories are accurately told through the eyes of those most oppressed and wronged by our “justice” system that has been created by white supremacists to benefit, support and uphold white supremacy.

People in the 80’s and 90’s knew that the police and prosecutors in Manhattan railroaded these young boys. And that their confessions were coerced and beaten out of them. The five men were finally exonerated in 2002, and the city of New York finally settled in 2014 for $41 million dollars for the pain, trauma, and prison time that they caused these young men and their families, and YET, the city admitted no wrongdoing.

“The City of New York has denied and continues to deny that it and the individually named defendants have committed any violations of law or engaged in any wrongful acts concerning or related to any allegations that were or could have been alleged,” the settlement states.

Watching this story told by Ava Duvernay, experiencing the injustice that occurred in this case, and then realizing that the 1976 Supreme Court in the case of Imbler v. Pachtman gives American prosecutors and district attorneys absolute immunity from being held legally responsible for their misconduct. This law is wrong, the opposite of justice, and it is abused and weaponized every day.

The prosecutors and the DA’s in this case have absolute immunity under Imbler v. Pachtman so none of the atrocities, lies, abuses, and inhumane treatment of Kevin Richardson, Antron Mccray, Raymond Santana Jr., Korey Wise and Yusef Salaam are able to be punishable by law, the city of New York sees none of this as misconduct since it’s considered legal.

That means that for the past 30 years there have been no serious consequences for Linda Fairstein and Elizabeth Lederer and the many others that are just as guilty of similar injustices, until now though nothing compares to what these men (and so many others) have been through.

Now Linda Fairstein, the former head of the sex crimes unit for the Manhattan District Attorney’s Office who was involved with the case, has resigned from the boards of Vassar College as well as several nonprofit groups. Now a best-selling crime novelist, she was also dropped by her publisher, Dutton, last week. She made a name for herself and profited personally and financially for 3 decades!

Doubling down on her innocence, as many do who are blind and ignorant of their blatant racism do, she wrote an op-ed in the Wall Street Journal calling Duvernay’s series “so full of distortions and falsehoods as to be an outright fabrication.” “Ms. DuVernay’s film attempts to portray me as an overzealous prosecutor and a bigot, the police as incompetent or worse, and the five suspects as innocent of all charges against them. None of this is true.”

She says, “It is a wonderful thing that these five men have taken themselves to responsible positions and community respect. That Ms. DuVernay ignored so much of the truth about the gang of 30 and about the suffering of their victims—and that her film includes so many falsehoods—is nonetheless an outrage. Ms. DuVernay does not define me, and her film does not speak the truth.”

Her words reek of privilege, entitlement, denial, and racism. I agree that she was passionate about demanding accountability for rapists, but her crime of knowingly and forcibly pinning this crime on 5 black teenage boys is not different than a violent rape when it’s all said and done for all that they and their families have been through.

DuVernay recently told the Daily Beast that she reached out to Fairstein, but ultimately did not consult with her on the project because the former prosecutor “tried to negotiate conditions … including approvals over the script and some other things.”

Fairstein “has never apologized or recanted her insistence on their guilt for the most heinous of crimes, ‘guilt’ based solely on evidence procured through violence and ill treatment of children in lock up.”

Also recently, Assistant District Attorney Elizabeth Lederer has resigned her position at Columbia Law School, yet takes no responsibility for her wrongdoing. Her resignation reads, “…given the nature of the recent publicity generated by the Netflix portrayal of the Central Park case, it is best for me not to renew my teaching application.”

Washington Post’s, Sarah Weinman reminds us that there is an additional cost to this case in the “other women were assaulted, raped, and in one instance, murdered by Matias Reyes, the man solely responsible for the attack on Meili. The New York Police Department and the prosecutor’s office failed these women, some of whom were attacked after Meili, because they believed, incorrectly, that Meili was just one victim of a crime wave taking place in Central Park that night.”

Last, and definitely the least respectable, is Donald Trump, then known as a real estate developer, who took out full-page ads in the New York Times calling for the death penalty to be reinstated for these young 15 & 16 year old boys…just as disgusting 30 years ago as today.

Before writing this, I watched the 4 part Netflix series and Oprah’s interview. I listened to the 3 podcast episodes by Shaun King on this series, and I read about 30 articles written about over the last decade, but there is obviously a lot more to this huge topic and I unfortunately cannot know that all that I have read and watched is 100% true. What I do know is that in the last 30 years way too little has changed and this kind of injustice is happening again and again and again, and our laws protect police, DA’s, prosecutors and exploit, demonize, and abuse black and brown people to the fullest extent of the law. It needs to change.