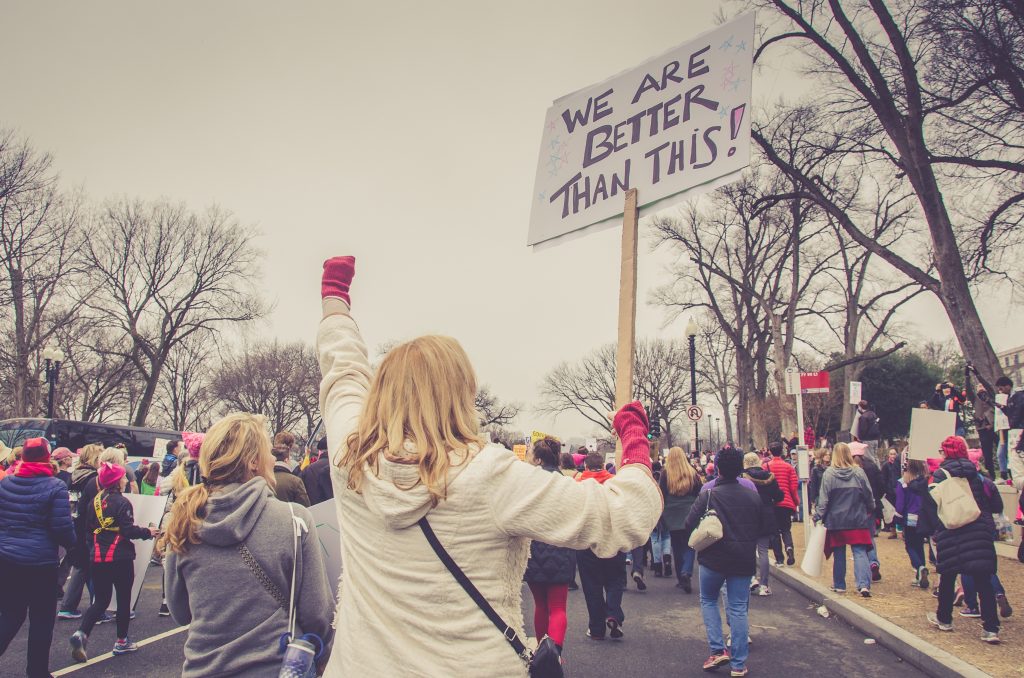 Almost 20 years ago, in my early 20’s, I was living in San Francisco. I was in a relationship with a man from Chicago who grew up in a predominantly white, Irish Catholic, working class neighborhood where it was very common for him, and mostly everyone in his life, to use racial and homophobic slurs in everyday conversation. He had many redeeming qualities and was very charismatic, but I honestly had to explain to him what was racist about his language and attitude. I had to tell him what it meant to be homophobic and why it was hurtful and not okay. I also had to tell him what a misogynist was and alert him that he spoke very aggressively towards, and about, many women.

He thought I was very funny for always stopping him when he said something I found to be cruel and inappropriate. I was constantly telling him why his language was not okay and what I didn’t ever want to hear him say around me again.

One sunny, warm day in Dolores Park, we came upon a gay couple, a black man and a white man. They were engaged in a passionate make out session. At first, I thought maybe they were naked, but as we came closer I saw that they were both wearing Speedo style swim suits. I don’t usually mind PDA, but the nudity and intensity of their passion did shock me. I realized that it wasn’t common for me to see two men on top of each other and kissing passionately. My body had a physical, kind of fight or flight, response, like maybe there was some danger. I felt ashamed about my response. I decided that I needed to see more men loving each other, making out, having sex, in intimate relationship until the newness subsided and I just saw two people engaged in whatever stage of love or lust they were experiencing together.

In response, I watched every episode of every season of Queer As Folk. It helped my brain and body normalize something that I hadn’t had enough opportunity to see before. It seemed, at the time, like a good solution and I was grateful for the TV show that, while obviously not a perfect or complete portrayal of gay life, had helped me move forward move through a level of my own homophobia.

My boyfriend’s response was different. He felt physically ill and needed to leave the park immediately. It made him very angry and felt intolerable to him. I witnessed him struggle with some very hard feelings. Maybe he was reacting to the fight or flight response it elicited in him? I’ll never know.

Over our two years together, I think he did learn a few things from me about how to speak and behave in a less offensive way. I’m sure that living in San Francisco changed him also. I know for a fact (because he later told me) that I opened his eyes in a lot of ways and made small cracks in the armor around his heart. Ultimately, his dedication to alcohol and numbing his own pain tore us apart and I finally gave up on him and was able to walk away and find a much better life for myself. With him, I learned a hard lesson in a harsh way; that I am not capable of ‘saving’ anyone but myself. I started a very long journey of healing my codependency.

I am fortunate to have been raised in a way that I never consciously felt animosity or superiority towards people that are different from me, whether it be by race, gender, sexuality, or economically. I’ve done my best to be a kind, real, and generous person to those that have crossed my path. But I have far too rarely sought to comprehend the complexity of all the lives around me, and beyond my view, that are systematically oppressed and marginalized. I have done far too little to fathom and pay respect to the kind of brilliance and fortitude that it takes to overcome and move forward anyway. I have never tolerated hateful speech or actions that occurred in my vicinity, but I also haven’t often enough left my comfort zone to protest and stand in solidarity with those that must fight daily even a sliver of the same equality and opportunity I have.

I regret all the time that I thought things were getting better and what I was doing was enough. I realize now that it’s so far away from being enough. The only thing to do now is to move forward from here with more humility, greater awareness, open my own eyes wider and crack open my own heart even more and learn a whole new way of how to be a better human.

That boyfriend of my early 20’s would say, “Ab, I don’t hate these people. This is just how I was raised and how I talk.” Back then, I couldn’t even begin to try to explain to him all that I knew was wrong with that sentence and his attitude. 20 years later, I can see myself in that sentence. I remember feeling pretty righteous about how I was so “conscious,” “open-minded,” and like I was somehow part of a solution, when I actually couldn’t even begin to comprehend the depth of the problem that I am a huge part of.

Thoughts and words like, “This is just how things are.” “There’s nothing I can do to change things.” are very dangerous, harmful and a huge part of every problem. More than 20 years ago, I made an intention to heal myself to the best of my ability and to do my best to cause no harm with my life. I’m still going and learning how to expand this prayer all the time. It will never be finished as long as I’m alive. Realizing new ways that my silence, ignorance and passivity cause a lot of harm is a welcome awakening.