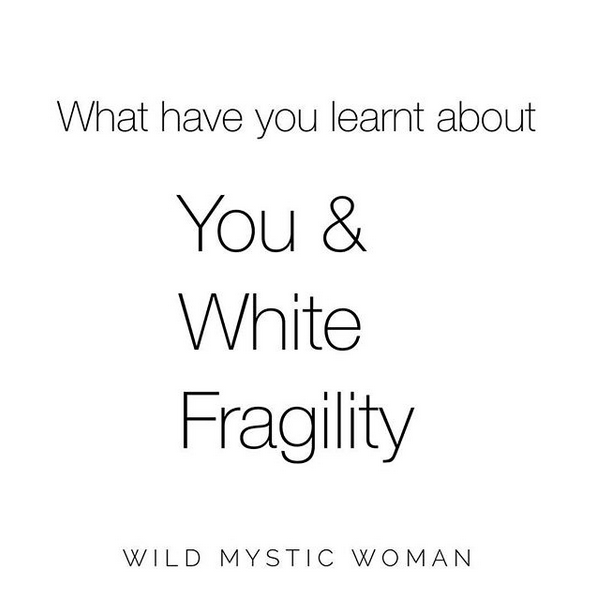 I’ve learned that my White Fragility is a way of centering myself as a victim and attempting to get others to care-take my hard feelings when I encounter racial stress or discomfort. I’ve noticed my fragile white behavior occurs when it’s been easier and more familiar than acknowledging the overwhelming prevalence and unfairness of structural and institutional racism, my part in upholding racial disparity, and how little I’ve done to fully educate myself and take action. I’ve learned that White Fragility is extremely destructive and violent behavior against people of color. It’s manipulative, gas-lighting and reeks of white supremacy, patriarchy, blaming the victim, and rape culture.

As a teenager, I wanted to join the Black Student Union to try to understand the racial divide I saw at my elite, private high school. I was told that I could be there, but I needed to sit in the back and not speak. It was shocking to not be welcomed warmly. I vividly remember the sting of that conversation and feeling misunderstood/punished for the behavior of “other white people.” I didn’t argue or defend myself, I didn’t cry or say anything at all, but my hurt feelings (white fragility) did keep me from continuing to show up and from pursuing my desire to understand. I let that sting and discomfort (white fragility) block my ability to be patient, listen and learn. I let my white fragility be the problem instead of acknowledging that rampant racism and my ignorance of it was the problem.

In my 20’s, I was part of a primarily Black, lesbian drumming ensemble. At the beginning, my drumming teacher told me unapologetically that I could be in the ensemble, pay for my lessons and learn what she had to teach, but that I was not her priority and she would not be catering to me or allow me to take anything away from the Black, lesbian community that her school was created to support. At first, I was taken aback and felt that sharp sting (white fragility), but I appreciated her blunt honesty and wanted to support her work even if I didn’t get to be a star or a favorite. I wasn’t a great drummer, but I was tolerated and allowed to learn, grow and be witness to the struggles, vulnerabilities and lives of the women in the ensemble. It was one of the most beautiful and authentic circles that I’ve ever been a part of. I did my best to be there in a way that wasn’t excessively harmful, insulting or annoying, but I cannot be sure that was the case. My teacher was patient and kind with me. She had unapologetic, clear, firm personal boundaries that blew my mind.

I’ve made conscious efforts to reign in my White Fragility and refrain from compulsively centering myself, but it’s not for me to say if I’ve succeeded since I’ve also been chronically unaware of the impact of my whiteness. What I have most certainly done was hold on to the hurt feelings in my heart and let it prevent me from similar future engagements. It’s like I’ve been waiting for Black women to say to me, “I see you. I accept you. You are welcome here.” Waiting like an eager puppy for Ally Cookies and pats on the back for being a “good white woman.” All the while, I have not gone out of my way to offer that same acceptance and assurance. I’ve mostly been saying, “We’re all the same. I love all people. I’m not racist. I love Black women (and men). You’re safe with me.” BUT I didn’t take the time to understand that we certainly are not having the same experiences or opportunities. I didn’t research or inquire HOW to be a safe white person, nor did I acknowledge the dangers POC experience in the same spaces where I am, and feel, safe.

I had a crush on a Black man in college. After we had hung out a few times, he told me to teach myself about reciprocity. I really wanted him to like me, so I tried to understand what he was talking about, but my life and safety didn’t depend on it and we eventually drifted apart to barely speaking.

My White Fragility is evidenced by the fact that I’ve only had a handful of encounters like this where I was advised to behave in a specific way because of my whiteness. My White Privilege is living primarily in an environment where I am welcome, allowed, able to express myself freely and often seen as a valuable presence. Feeling the otherness of my presence being a burden, a force to be managed and instructed how to behave feels foreign, uncomfortable and surprising because my White Privilege has told me that I can mostly expect to be racially comfortable. My whiteness creates a reality where I can barely comprehend a life of being constantly policed, seen as suspicious, criminalized, eliciting fear, undue aggression and prompting others to need to let me know how to behave and what the rules are.

I am thinking about all the energy, beauty, brilliance and creativity that our world could benefit from even more if all POC could spend their time and energy becoming their true authentic selves 100% without constantly dealing with racism, White Privilege, White Frailty and White Supremacy. If they didn’t have to work twice as hard for half and much and if they weren’t policed, put down, put in jail, shot, censored, banned, deported, and denied racial equity. It’s not just other evil, racist, deplorable people that have been allowing this to happen, it’s me too. It needs to end by any means possible.

My prayer is to open myself to experiencing, hearing, learning about, and understanding racism more deeply and use my creativity to help other white people do the same. I see that opting out is no longer an option if I want the benefit of black and brown sisters in my life. I certainly have the resources to take care of myself and move past my white fragility swiftly and as often as necessary and keep moving forward. For me, it’s the next right thing to do. #meandwhitesupremacy

Day 2 Question: “White fragility is a phrase coined by author Dr. Robin DiAngelo, and is defined as “a state in which even a minimum amount of racial stress becomes intolerable, triggering a range of defensive moves.” It wasn’t until I began directly writing and talking about race that I realised how deeply white fragility runs in the vast majority of white people. So many of the white people who were interacting with my work had so little experience talking about race, that *any* racial discussion lead to them having a total meltdown. White fragility shows up as white people getting angry, defensive, afraid, arguing, claiming they’re being shamed, crying or simply falling silent and choosing to check out of the conversation. It looks like calling the authorities (the manager, the police, the social media censors) on BIPOC when you are uncomfortable with what they are sharing about race. (I have had my social media posts reported and censored more than a dozen times because of white fragility). On social media platforms it also includes deleting what you wrote (another form of running away and pretending it never happened) when you can’t handle where the conversation is going. White fragility includes White Woman Tears in racial interactions. In essence, white fragility looks like a white person taking the position of victim when it is in fact that white person who has committed or participated in acts of racial harm.
.
What have you learnt about ‘You & White Fragility’? How has and/or does your white fragility show up? How have you fallen apart or taken the position of victim during racial interactions? How have you weaponised your fragility against BIPOC through for example, calling the authorities, crying, claiming you’re being harmed (‘reverse-racism!’, ‘I’m being shamed!’, ‘I’m being attacked!’)? What emotional outbursts have you had during racial interactions? Or how have you shut down, walked away, deleted everything and pretended nothing happened and hoped no-one would notice?
.
What has your white fragility looked like and why have you acted in that way? How fragile are you when it comes to talking about race?” – Layla Saad